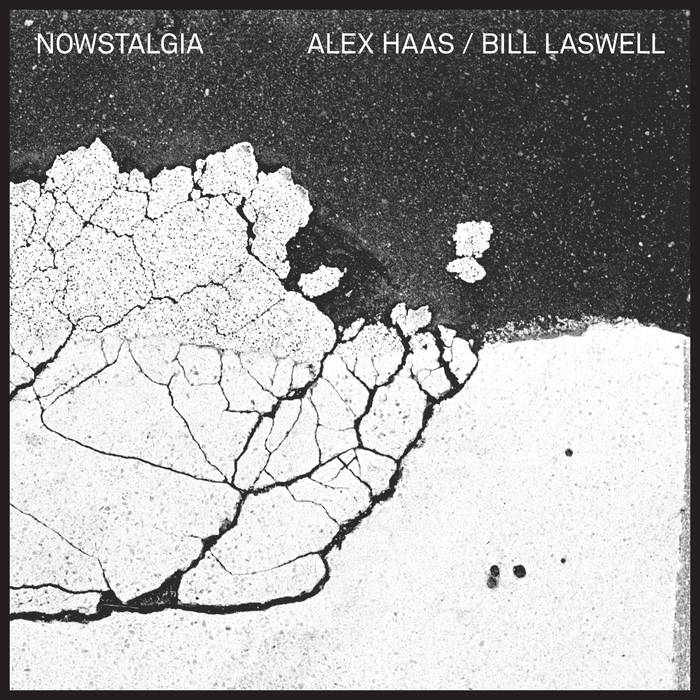 NOWSTALGIA is the latest collaboration between musician/artist Alex Haas and bassist/producer Bill Laswell who have worked together in various capacities for 30 years. Both are New Yorkers caught in the flux of a changing city. The 8 tracks on NOWSTALGIA are at once a remembrance and homage to the organized chaos and energy that has been their creative muse and home since the 70’s. Although the tracks vary in style they are all imbued by the city: It’s musical melting pot, shady characters, extremes all kinds, and decay and renewal can be heard in various musical elements throughout . There is a melancholy on many of the tracks which is a testament to a time when creativity and grit were the guiding forces in a now more corporate cleansed city. The music was conceptualized without any preconceived thought to genre but includes elements of dub, trip-hop, ambient, rock, electronica, etc. The album is distinctly a Haas / Laswell album but one can distinguish many of the influences from both of their professional collaborations.The line up is as eclectic as a Haas/Laswell production should be. Eddie Martinez on guitar (Robert Palmer, Lou Reed, Ryuichi Sakamoto), Eraldo bernocchi on guitar ( Harold Budd, DJ Olive, Markus Stockhausen), Lex Grey on vocals (The Urban Pioneers), Satch Hoyt on flute (Grace Jones), Jamil Al-Allami on Aoud among others.

The album was recorded between Paris, New York and Berlin.

Alex Haas studied computer music at MIT and guitar/composition at Berklee College of Music in Boston. He moved to New York City in 1982 to work at the famed Power Station Recording Studio and and built a career in music engineering/production. Such seminal artists as U2, Brian Eno, Bill Laswell, Eric Clapton, Kronos Quartet and Pat Metheny credit Haas on dozens of award winning albums. Haas co-founded Cypher 7 with Jeff Bova, an influential and critically acclaimed band at the forefront of the electronic ambient music scene of the 1990’s. All three albums were produced by Bill Laswell. Haas has released 2 solo albums “ Buildings” and “Oblivion”. Since 2001 he has been creating and exhibiting his visual works that apply theoretical concepts used in his recordings. Haas now lives in Paris and New York. Haas is the son of world renowned photographer Ernst Haas.

Over the course of some three decades, visionary bassist-producer Bill Laswell has been one of the most prolific and restlessly creative forces in contemporary music. A sound conceptualist who has always been a step ahead of the curve, he has put his inimitable stamp on nearly 3,000 recording projects by such artists as Mick Jagger, Yoko Ono, Iggy Pop, Laurie Anderson, Brian Eno, Bootsy Collins, Nine Inch Nails, Motorhead, Peter Gabriel, Blur, The Ramones, George Clinton, Pharaoh Sanders, The Dalai Lama, Matisyahu, Angelique Kidjo, DJ Krush, RAMM:ΣLL:ZΣΣ, Sting, The Last Poets, Afrika Bambaataa, Julian Schnabel, Whitney Houston, Manu Dibango, Fela Kuti and most notably Herbie Hancock, who collaborated with Laswell for the pivotal 1983 smash-hit single "Rock-It" which introduced scratching to the mainstream, inspired a generation of turntablists and gave the great jazz pianist instant street credibility among the burgeoning hip-hop cognoscenti.

Laswell's sense of creative daring as a producer was further demonstrated on several recordings that have kept him on the cutting edge, including Afrika Bambaataa's collaboration with John Lydon (aka Johnny Rotten of Sex Pistols fame) on World Destruction and PiL's Album (which brought together an unlikely pairing of drumming greats Ginger Baker and Tony Williams, synth-pop pioneer Ryuichi Sakamoto of Yellow Magic Orchestra fame and rising guitar star Steve Vai). His spoken word collaborations with William S. Burroughs and expatriate writer-composer Paul Bowles have gone against the grain of music industry trends while his radical remixes (or re-constructions) of landmark recordings by Miles Davis (Panthalassa), Carlos Santana (Divine Light), Bob Marley (Dreams of Freedom) and a vast scan of dub-related and atmospheric ambient projects have gone on to further defined Laswell’s presence as a revolutionary iconoclast.


Bill Laswell has helped in generating several innovative recording labels such as Celluloid, Subharmonic, Black Arc, and Innerhythmic. Along with Chris Blackwell, founder of Island Records (Bob Marley and U2), he established the AXIOM label in 1989. M.O.D. Technologies, his most recent.

All tracks written and produced by Alex Haas and Bill Laswell

IN THIS WORLD OF LOVE